The most characteristic aspect of bridges to be built by incremental launching is the necessity to absorb the stresses associated with the temporary support configurations that are gradually taken on by the deck during its movement. Thus, the design of incrementally launched bridge needs a considerable amount of static calculations. For analysing large number of support configurations of the launching deck, there is a need to use an agile and fast algorithm. Hence, formulations are developed for solution of incrementally launched bridges using transfer matrix method.

Using the computer program developed, a detailed study has been carried out for nose-deck interaction with different influencing parameters which helps the designer in achieving economic sections of the concrete bridge deck as well as launching nose. From the parametric studies carried out on incrementally launched continuous bridge, it is observed that load and length ratios play key role during launching whereas the stiffness ratio is not so predominant. 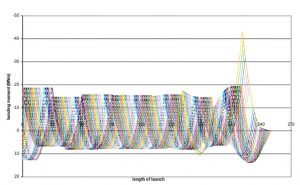 A Knowledge Based Expert System (KBES) has been developed to aid in decision making process for condition assessment of bridges and has been successfully demonstrated. The expert system processes the data collected from field inspection, including results of visual observation, destructive, partially destructive, non-destructive tests, laboratory tests, and chemical analysis of samples. The coupling of symbolic and numeric type of data has been successfully implemented in the expert system to strengthen its decision making process. The expert system developed in this study is capable of handling large data (both symbolic and numeric types) and gives most probable reason for the distress and finally assesses the condition of the bridge. It is opined that this expert system would help the bridge inspectors immensely in selecting the parameters for carrying out proper inspection and evaluating the condition of the existing reinforced concrete bridges.

A computational tool has been developed for condition ranking of bridges using analytical hierarchical approach and fuzzy logic. In this approach, the entire bridge has been divided into three major components namely, ‘deck’, ‘superstructure’ and ‘substructure’. Each component is further sub-divided into number of sub-components. Using fuzzy mathematics, rating of the bridge has been arrived at from rating and importance assigned to individual components. Then, the Euclidean distances of all possible fuzzified integers from the resultant rating are mapped and the least one is referenced as the rating value of the bridge as a whole. From the study using this program, some of the limitations of this method are identified. To overcome these limitations, formulations are developed using resolution identity technique to arrive at a narrow banded resultant rating.

Most of the structures need assessment, maintenance and monitoring to ensure their integrity. Recent development in signal processing made it possible to perform on-line health monitoring and damage assessment. Usefulness of different parameters, such as changes in frequency, mode shape, modal curvature and strain energy for detection of damage has been studied. Methodologies have been developed based on vibration characteristics for detection, localization and quantification of damage using transfer matrix technique, frequency matching approach, changes in modal strain energy and uniform moment surface. Further, advanced non-model based techniques have also been studied for damage identification.

Studies have been carried out on the usage and effectiveness of artificial neural networks (ANN) and genetic algorithms (GA) for detection and localization of damage especially in bridges. To demonstrate the applicability of ANN in damage detection, a cantilever beam has been considered with different levels of damage in single and multiple damage scenarios. The ANN has been evaluated for different test cases with various levels of damage for single and multiple damage locations and tested with the measured data reported in the literature. The damage magnitude and the location predicted using the trained ANN are found to be in close agreement with the target values.

Deterioration and degradation of aging structures is a major concern worldwide. It is often becoming necessary to evaluate the integrity of such structural systems. Early detection and eventual quantification of damage are important for improved safety, to prevent potential catastrophic events, and to extend the service life by repairing/retrofitting the components of the structure. Different methodologies have been proposed in the literature for identification and localization of damage based on optimization techniques and modal based approaches. The main drawback in using the optimization approach based on evolutionary algorithms is that it requires the evaluation of the objective function for the total population in each generation. As this is computationally intensive, in the present study, a multi-stage approach has been proposed.

In this, at first, localization of the damage was achieved so as to reduce the number of parameters of the objective function in the optimization approach. These identified damaged elements were analysed further for exact identification and quantification of the damage using genetic algorithm (GA) based optimization approach. To demonstrate the efficiency of the proposed hybrid approach, numerical studies have been carried out on selected structures. The approach of using modal strain energy change ratio to identify damage at first stage identification is found to be very useful in reducing the objective function parameters in optimization method. This multi-stage approach is found to be very efficient in exact identification and quantification of damage in structures. The proposed approach could be used for identifying damage in large scale structures.

A large number of post-tensioned prestressed concrete segmental bridges are being constructed worldwide. Use of different materials and shear keys will have varying effects on the performance of segmental girders even during the service load. The type of joints, quality of joint, degree of mechanical actions and the joint materials will contribute to the variation in the behaviour of the segmental girders. Hence, the need for investigation on the epoxy jointed segmental box girder and dry jointed segmental box girder becomes necessary. Experimental investigations were carried out on a scaled model of precast post-tensioned concrete segmental box girder to evaluate the performance of epoxy and dry segment-segment joints of the girder. Two stage and match cast method was applied for casting of trapezoidal box shape precast segments.

Performance of the test specimen consisting of epoxy and dry joints were studied under static and cyclic loading. Static loading was applied to get the first crack, then monotonically increasing cyclic load (displacement control) was applied to the specimens upto failure load. Both test specimens was found to be performed well similar to the monolithic beam upto ultimate load. Repeated loading and unloading resulted in opening and closing of the – joints between two segments, which result in loss of stiffness of joint and crushing of concrete above the joint at mid span and found that the phenomenon is much severe in dry jointed specimens. It was observed from the present study that the segmental box girders with epoxy joint showed better performance than the dry jointed segmental box girder due to additional tensile strength in the joint region. Nevertheless, dry jointed bridges are preferred in some cases due to environmental constraints or site requirements. The load- deflection behavior (under cyclic load), strength degradation, stiffness deterioration and stress development in tendon etc. obtained from the experiments will be useful to the bridge designer to check the performance of the segmental girder at different load levels.

Experimental modal analysis has been carried out on a reinforced concrete beam and a slab-strip representing the bridge spans by adopting different types of excitations and forces. Limitations observed in the vibration testing on an RC beam with regard to higher frequency ranges, reduction in force rating of shakers at higher frequencies etc have been taken into consideration while designing a flexible beam in the form of slab-strip such that the frequency ranges (first three modes) are within the excitation ranges of the shaker and also the resonant frequencies are near to the real prototype structural members. The frequency and mode shape information have been extracted for various damage levels by analysing the data-in-time and frequency domains. From the vibration testing, the vibration response in terms of time history and frequency response functions (FRFs) before and after the damage is evaluated.

The influence of various parameters such as support conditions, excitation sources, level of excitation etc. on the modal characteristics have been studied. Due to non homogeneity and micro-cracks in concrete, vibrational response (in terms of frequency) obtained from small hammer is different from big hammer and its effect is more prominent at higher damage levels. Considerable variation in mode shapes is also observed in case of small and big hammer excitation. It is observed that the resolution of modal reponses in case of burst random is much better when compared to true random excitation. The frequency changes with change in excitation force level and this behaviour in nonlinear vibration characteristics is very useful in the assessment of damage, particularly in the case of reinforced concrete structures where the material is non homogeneous and the existence of microcracking in the concrete even at undamaged level.

Reinforced Concrete (RC) structures respond in nonlinear manner under dynamic loads even at low levels of vibration. This causes softening in concrete which may results in the unstable vibration. By considering the non linearity, the effects of amplitude of vibration on the modal characteristics can be used to extract damage sensitive features. Studies were carried on the phenomena associated with nonlinear vibration which were observed during the vibration tests on damaged RC structures. For effectively identifying the nonlinear damage features in RC structures from the frequency spectral information, an appropriate vibration testing procedure is formulated in the present study. Damage features are evaluated from the changes in vibration amplitude with frequency at different damage levels under various type of excitation and their force levels.

Damage indicators based on basic signal statistics and non linearity in vibration responses are evaluated. Using the phase plane information obtained from various damage scenarios, nonlinear damage indices have been formulated. Another significant nonlinear damage feature has been identified by the occurrence of higher harmonics observed by analysing the spectral density functions obtained from the frequency domain decomposition. The results obtained from the present study would pave the way for identifying the damage in heterogeneous and nonlinear structures such as reinforced concrete.